On the trail of the Hudson Bay Quest 2015

The Hudson Bay Quest (HBQ) is a 320 kilometre (200 miles), mid-distance dogsled race, a qualifier for the Yukon Quest and Ididarod. A self-sustained wilderness race; the musher must carry everything that they and the dogs will need, no dropping supplies at a checkpoint. What is not used on the race must remain on the sled until the racer finishes. Brainchild of  David Daley of Wapusk Adventures in Churchill, the inaugural race was in 2004. The route was then from Churchill, Manitoba to Arviat, Nunavut or the reverse. The seemingly scheduled extreme blizzard, overflow on the rivers, the barrenlands and sea ice travel were making this route downright dangerous. As of the 2011 race it's route is from Churchill to Gillam Manitoba or reverse, this year was Gillam to Churchill.

Since 2008 my partner Claude has been the trail-boss of the race, his duties encompass everything trail. Weeks before the Mid-March start he is studying maps and working on his G.P.S., he likes to give the returning racers some variety in the trail route. About a week before the start he is off on his snowmobile heading to Gillam checking conditions and deciding the route that the race is going to take.

This year I was charged with the position of Trail Support, I called myself Trail Idiot but Claude assures me the name doesn't suit me. Completely out of my element there were times that the whole experience was completely overwhelming. My first lengthy trip on a snowmobile (to our cabin was my longest ride before this), first time pulling a komatik, (a large heavy wooden sleigh pulled by either a snowmobile or dog team), first time marking the trail for the mushers, first time in lead, I  am usually behind him. Claude was using a groomer and he wanted the mushers to be the first to travel on the trail he left. 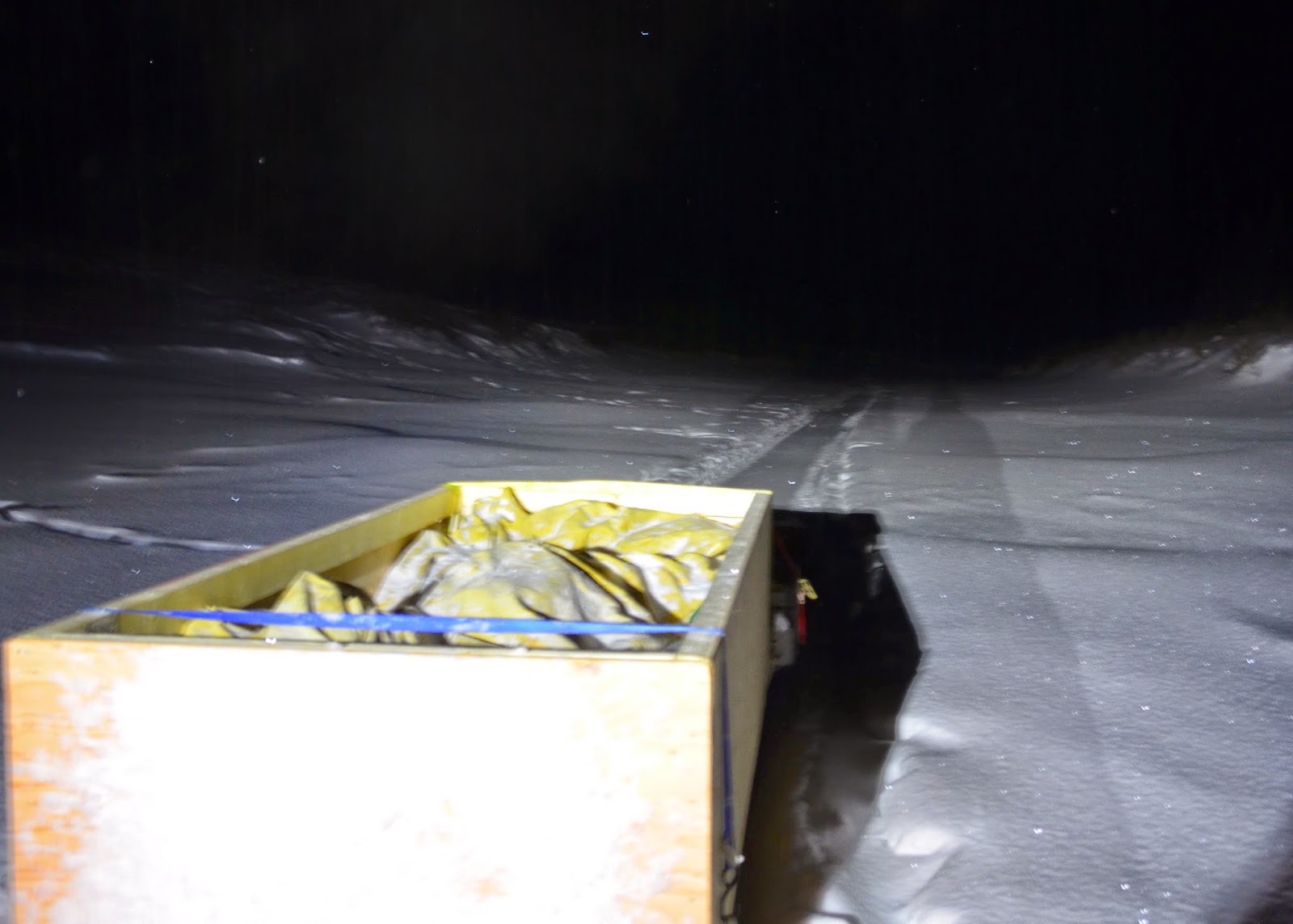 The groomer leaves a smooth flat running surface for the dogs.
My experience started with a train ride from Churchill to Gillam. One of our snowmobiles was being repaired in Thompson and meeting us in Gillam, otherwise I would have travelled both ways by machine. The train was carrying the Churchill mushers and their 40 some dogs, all kenneled on a luggage car donated by VIA Rail. We arrived in Gillam about 4:30 am where the dogs were quickly unloaded to trailers and trucks, transportation was kindly donated by volunteers in Gillam. Down to the dog yard we went. The yard is set up so that every team has a chute, high banked snow breaks the wind for the dogs. 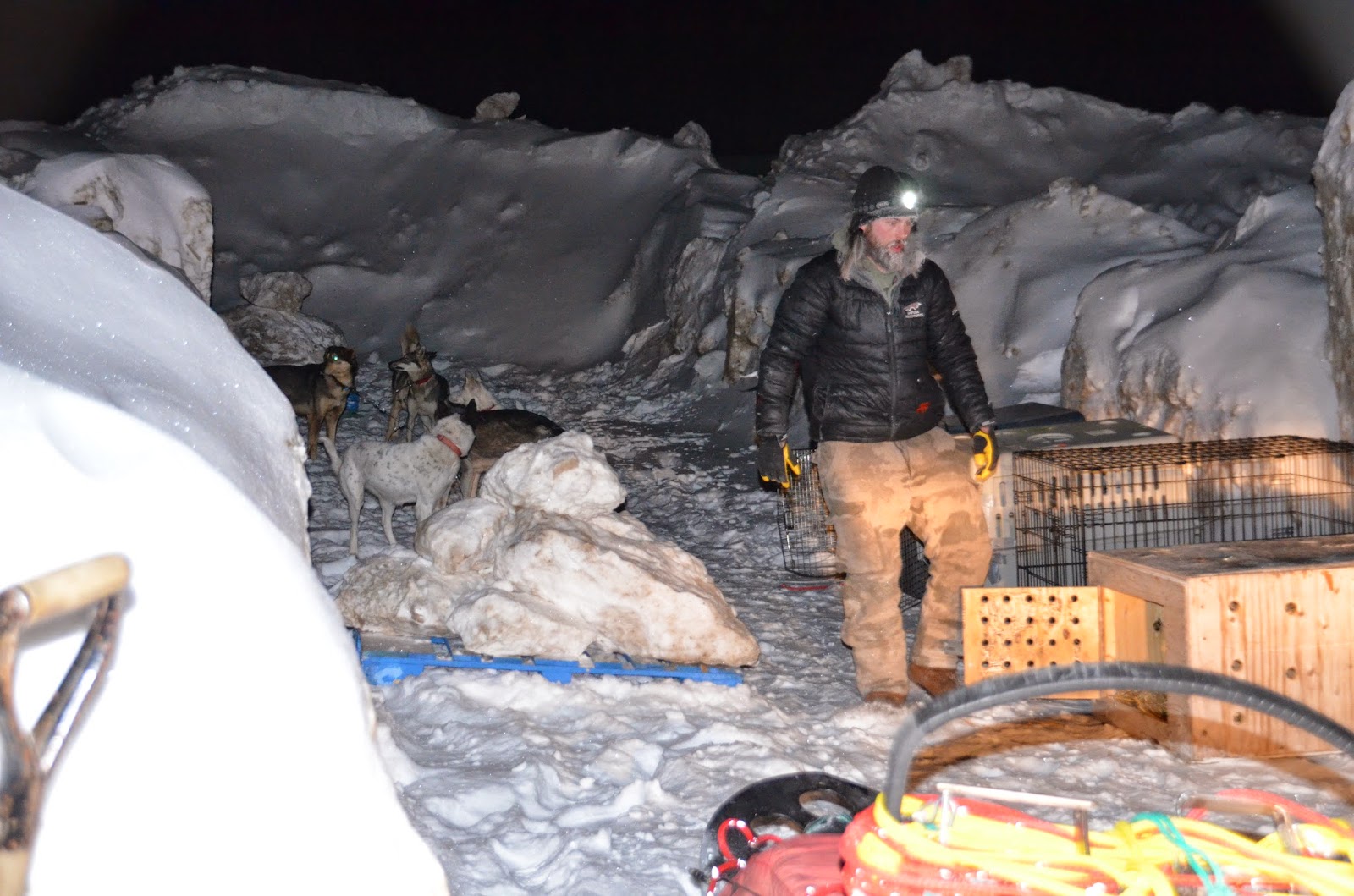 Justin Allen and his team of Wapusk Adventures dogs.
The dogs bedded down; it was about 9:00 am by the time the mushers settled in hotels. The party began; but that's all that I will say about that. Two days until race day. Thursday was spent tending to the dogs and welcoming arriving mushers and teams. This year we were host to teams from Quebec and the northern United States. Claude arrived after his solo trip down from Churchill, it was sure nice to see him. 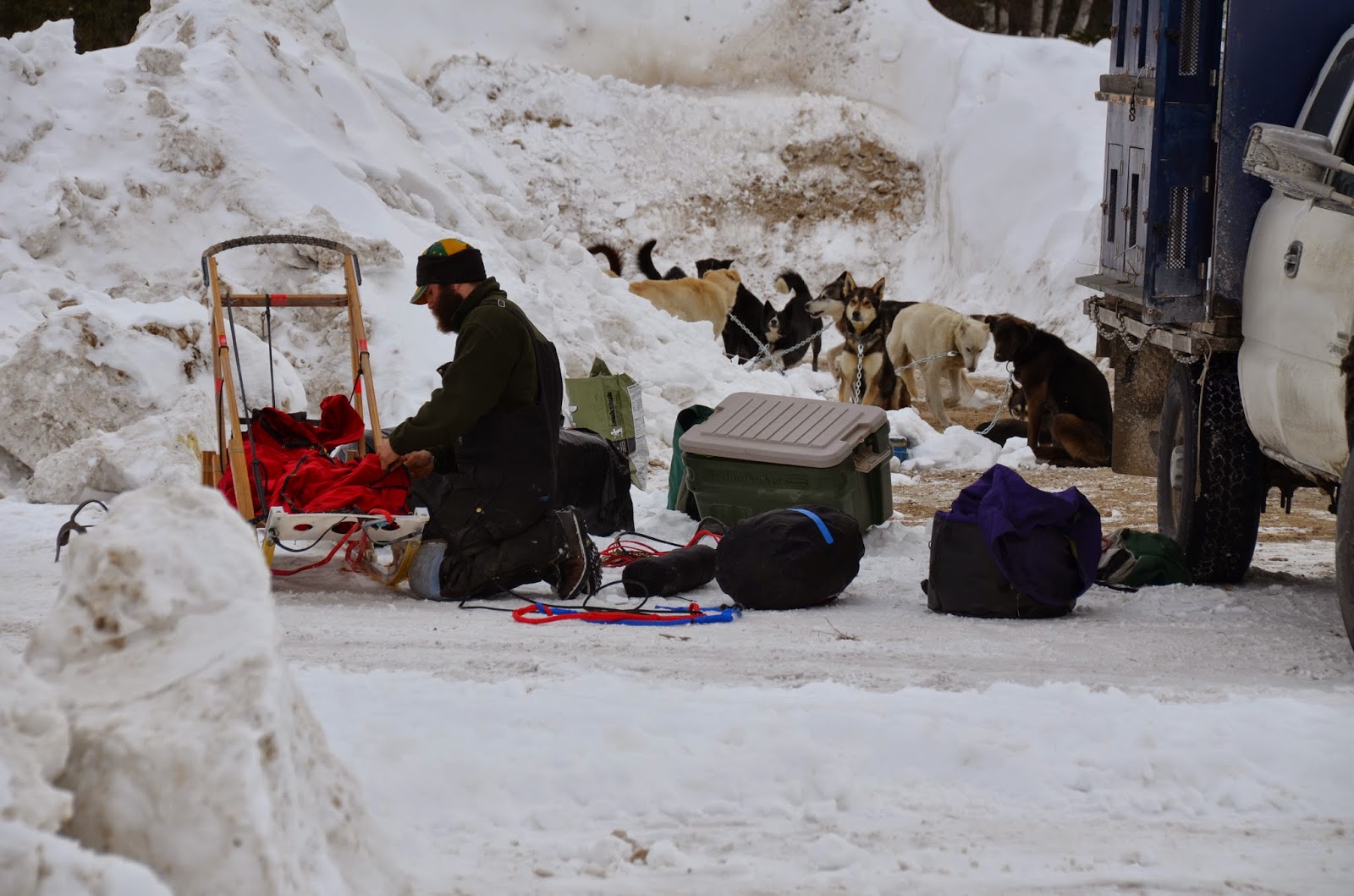 The southern racers make their way to Gillam is specially equipped pickup trucks.
Thursday; and the arrival of the repaired snowmobile, we transferred ourselves to Kettle Camp, a Manitoba Hydro workers camp, much like a hotel in the middle of nowhere; clean and comfortable. The day was spent in meetings; committee, mushers and more committee meetings ironing out the final details and making sure that the mushers understood the route and the rules. The evening event was  "Meet the Mushers", an opportunity for the people of Gillam to see the racers and get autographs. The schools have a program called "Adopt a Musher", classrooms are assigned a musher and team, they make posters and follow "their" musher throughout the race. The mushers, Claude and I were assigned "Spots"  much like a G.P.S they follow our every move, anyone can monitor the race online. Claude's daughter plays a game she calls "follow the bush man" she watches us mile by mile. This year her six year old stepson watched with her and was so excited that Claude and I were winning.
The mushers are introduced and the bib draw conducted by the race marshall. The receiving of the race entry by the committee decides the team's placement in the bib draw. This year first in the draw was Martin Massicotte from Trois Riviere, he picked  number thirteen, it proved to be a lucky choice as he was first to cross the finish line in record time. 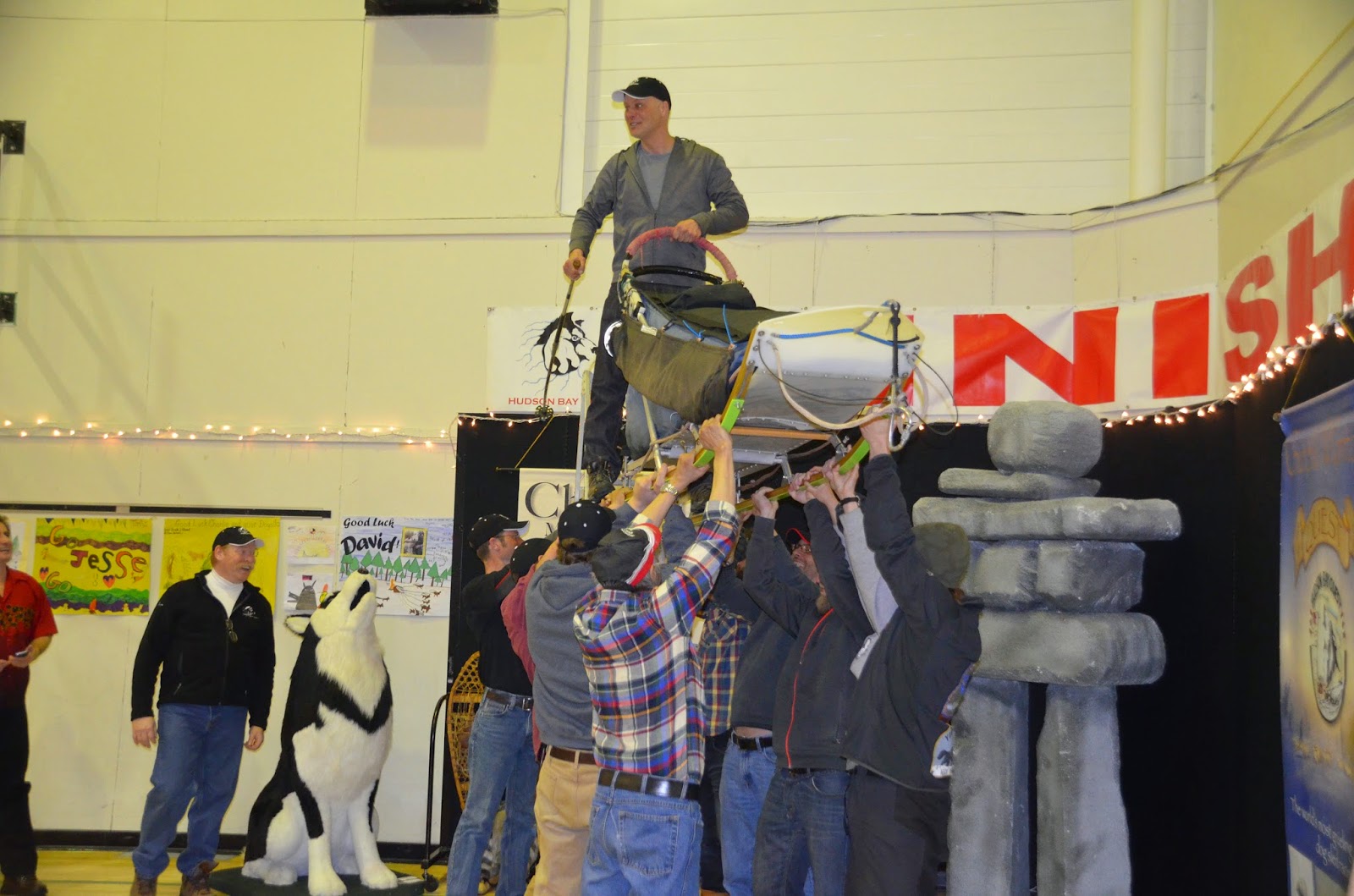 Claude and I departed Gillam at 9:00am Friday, the racers would start at noon. He was pulling a komatik with our gear,everything we would need for a couple of days, behind that was the trail groomer. I was pulling just a komatik. We left from the dog yard across Stephens Lake (part of the Nelson River) crossed the Gillam Hwy to the Hydro Line. This first part of the trail stays on the Hydro line. After the highway the next obstacle is Sky Pilot Hill, the mushers talk about it and now I know why. Claude didn't say much, he didn't want me to overthink it.  The only thing I really remember is feeling the komatik chasing me down this ultra steep long hill. I tried the brakes and the machine slid sideways a bit, fearing a jack knife of the sleigh I let the engine do the work slowing the machine. I think the only hills in Manitoba are in this area but none we encountered were like this.
We arrived at Owl River about two pm. The first checkpoint on the race;  manned by the Gillam Canadian Rangers. We were welcomed, hydrated and on our way. By this time our parkas were off and we were dressed for spring, this was the warmest Hudson Bay Quest (HBQ) on record, the temperature was about 0 Celsius, quite lovely for us but hard on the teams. On to checkpoint two, McClintock.
The ride to McClintock also followed the power line, the poles mark the trail so my only task was to place a marker every five kilometres. We arrived at the second checkpoint at around 5:30 pm met by a mix of Gillam and Churchill Rangers and Brett Wlock from Manitoba Conservation. Brett was volunteering, he manned the cabin for the vets and what a job he did, cooked, cleaned and added a door to the bathroom. We had a bite to eat and then hit the Deer River headed for Churchill, fully expecting to arrive there about midnight or so.
The Deer River is known for slush. We stopped along the way; Claude carries a satellite phone, he took the opportunity to call his son, daughter and a friend of his that worked on the trail the previous year. He made a point of telling his friend Doug that there was no slush on the Deer. About 5 minutes after that phone call I ran into slush, we had made arrangements for this, I was to turn on the light on the back of my machine to let Claude know, the problem was I couldn't get to the light before he was stuck. I could hear the track on his machine gurgling and knew we were in deep deep trouble. 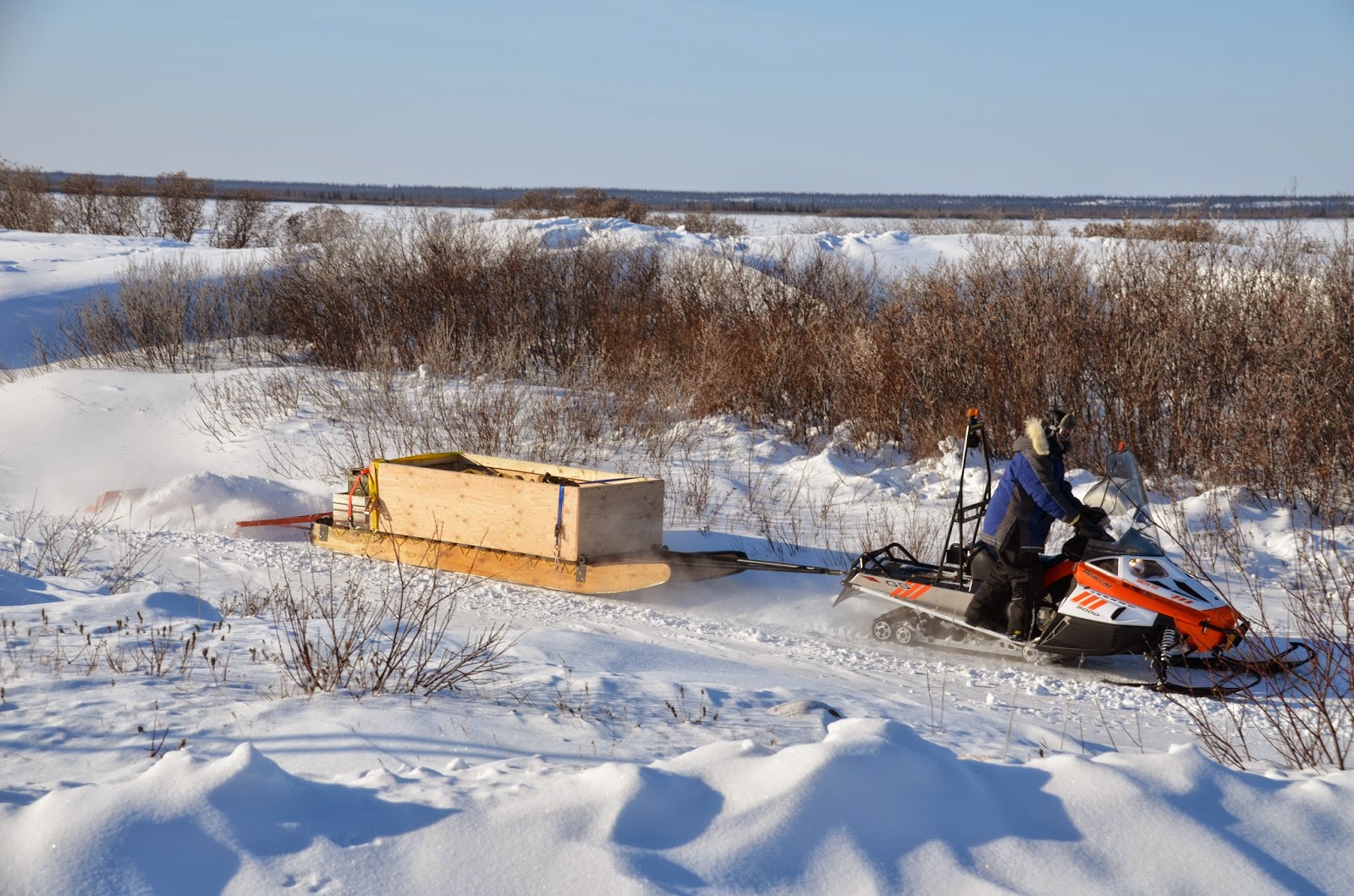 The BearCat, the komatik and the groomer before they were all stuck.
Claude and his machine pull a heavy load; over snow is hard enough, in slush impossible. I will admit now that I was useless as a helper, so out of my element, all I did was push the button on the winch. I just kept thinking of the Corb Lund song "The truck got stuck." He went into the slush at 10:00pm and for three hours he pushed, pulled, winched and sweated until they were finally back on solid snow around 1:30am. At one point he said to me "Oh honey look at the sky." it was covered by bright green, dancing northern lights. Just when I thought we were on our way he told me that he had to go back, "you can't go back that's where the slush is." " I have to make a safe trail for the mushers." and off he went. I sat on the machine for about 10 minutes watching the sky and listening to the sound of the machine, wishing and hoping that I wouldn't hear that gurgling sound again, relieved when I saw the lights of the snowmobile approaching out of the darkness. The most amazing part of this whole ordeal to me is that not once did he lose his temper, not once did he his show frustration.  At 4:20 am we staggered into Lamprey cabin; checkpoint number 3, manned by Churchill Canadian Rangers. From the back of the cabin we heard "Who's that?" it was Dixon Hunter. We told him who we were and a bit of what happened. He jumped up, lit the lantern and told us to wait a second and he'd get dressed. We heard "Ranger up boys. You're tired wet and hungry. Are smokies okay and how many do you want?" From that moment on they did everything they could to help us out, hung our wet gear to dry, fed us, one of them gave up their bunk so that we could rest. There were eight people in that one room cabin, adding us made ten, it was more than a little crowded. 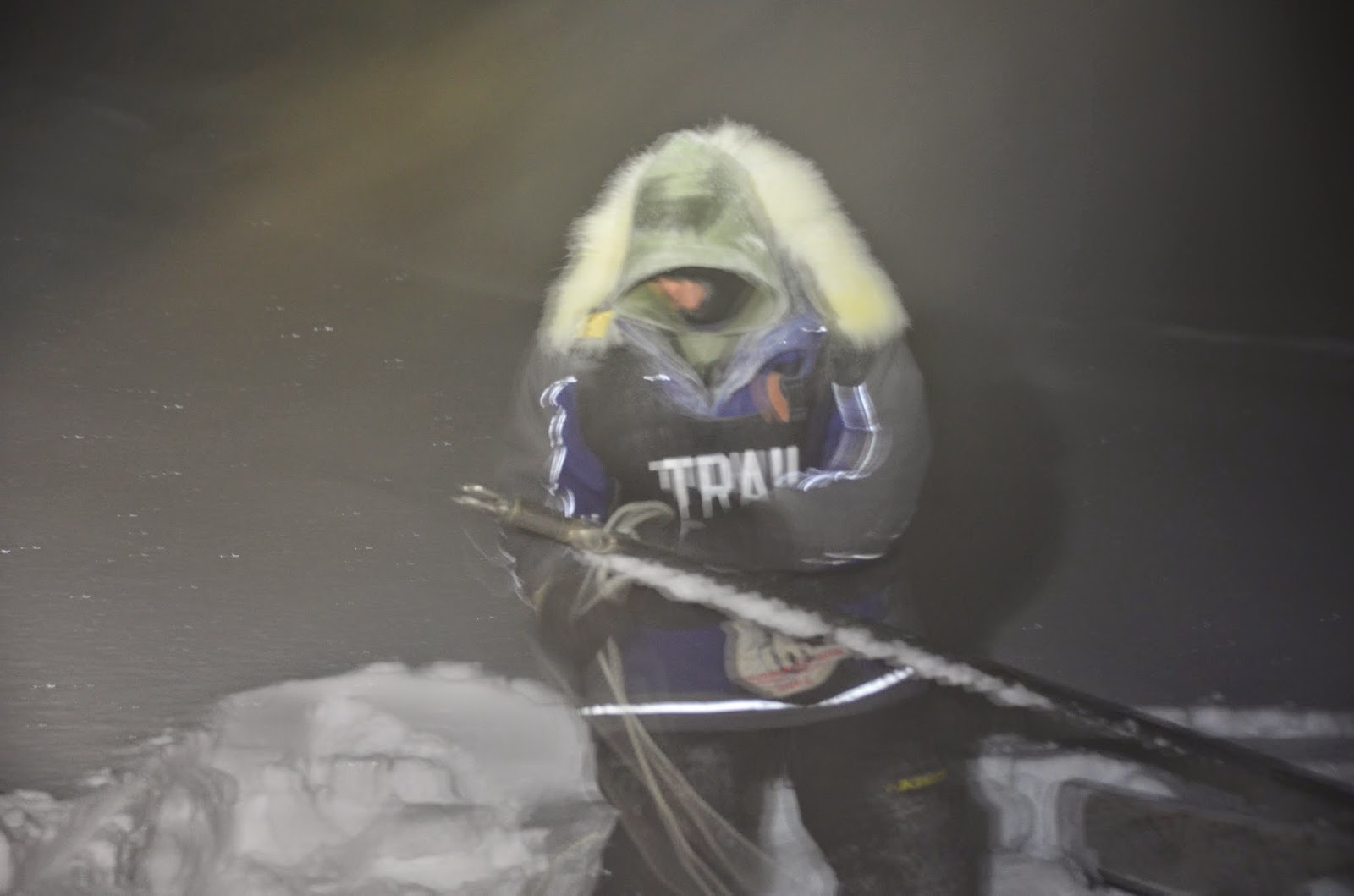 Wet with sweat, the komatik and groomer were still stuck.
The sun came up Saturday morning and it was just a little colder, off the Deer River onto the Churchill, we were almost home. Incident free along the river into the bush, along the tracks and to the finish line. To Gypsy's for some grub and then home to rest. We were lucky this year, it was the first time in all of those years that Claude was standing at the finish line when the winner crossed. This was one of those experiences I get to have with Claude, he believes in me when I don't and gives me the confidence to accompany him on his adventures; for that I am grateful.