A box of meatballs

Sunday morning the 15th of March, the HBQ is not quite over for one of the mushers and us. Before Tom Terry could finish the race a storm blew in, he was not being over-cautious when he stopped travelling; it developed into a full blown white-out. He did the right thing.

Claude got the call the night before and monitored Tom by computer, working out his location for pretty much the rest of the night. He gave Brett Wlock a call to see if was interested in coming with us to collect Terry and the team, of course he was all in.
We got up at 4 am; I'm not really at my best that early. I like some coffee and some quiet before I get moving. The problem with coffee is that too much and I will be freezing my butt off; enough said. Pack warm liquids and a sandwich for Tom and we're on our way.
We met Brett at the beginning of the trail and took off with Claude in the lead. About 2 hours later we were out of the bush and onto the river. Claude amazes me quite regularly but come on; I looked out and there was Tom's camp. Claude said that they were about 400 metres from where he thought he'd be. 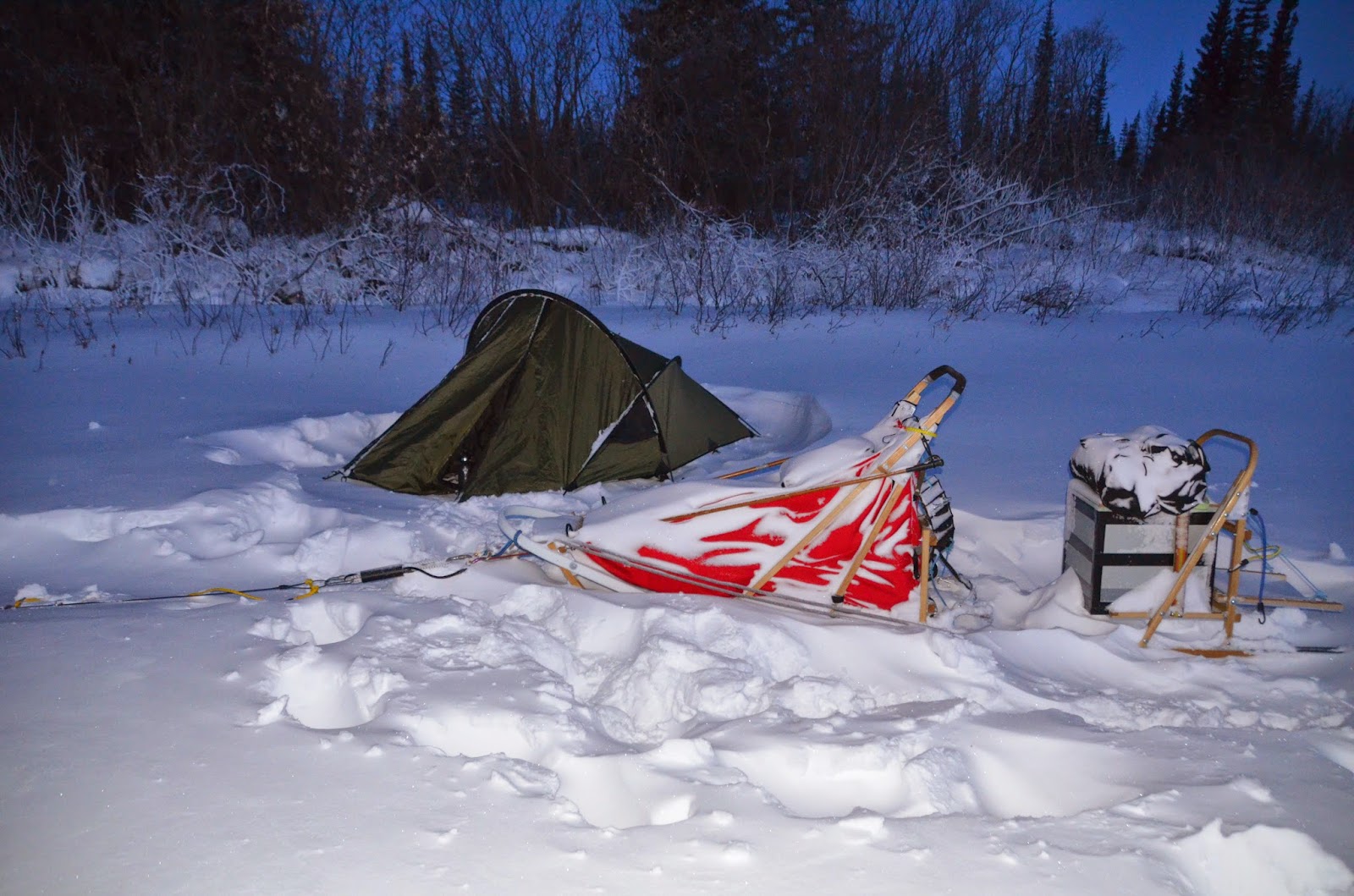 Tom's overnight accommodations.
Having missed his alarm, Tom was still sleeping. Later he told us that he'd had the best 12 hours sleep that he could remember. We had to get him moving as there was another storm coming that afternoon. Claude handed him a thermos to get him rehydrated and Tom slowly got himself up.
We had pulled a komatik for the sled and gear, another with a box on it for Tom and the dogs. They packed up the gear and now it was time to pack up the dogs. Brett checked to make sure they would be comfortable. 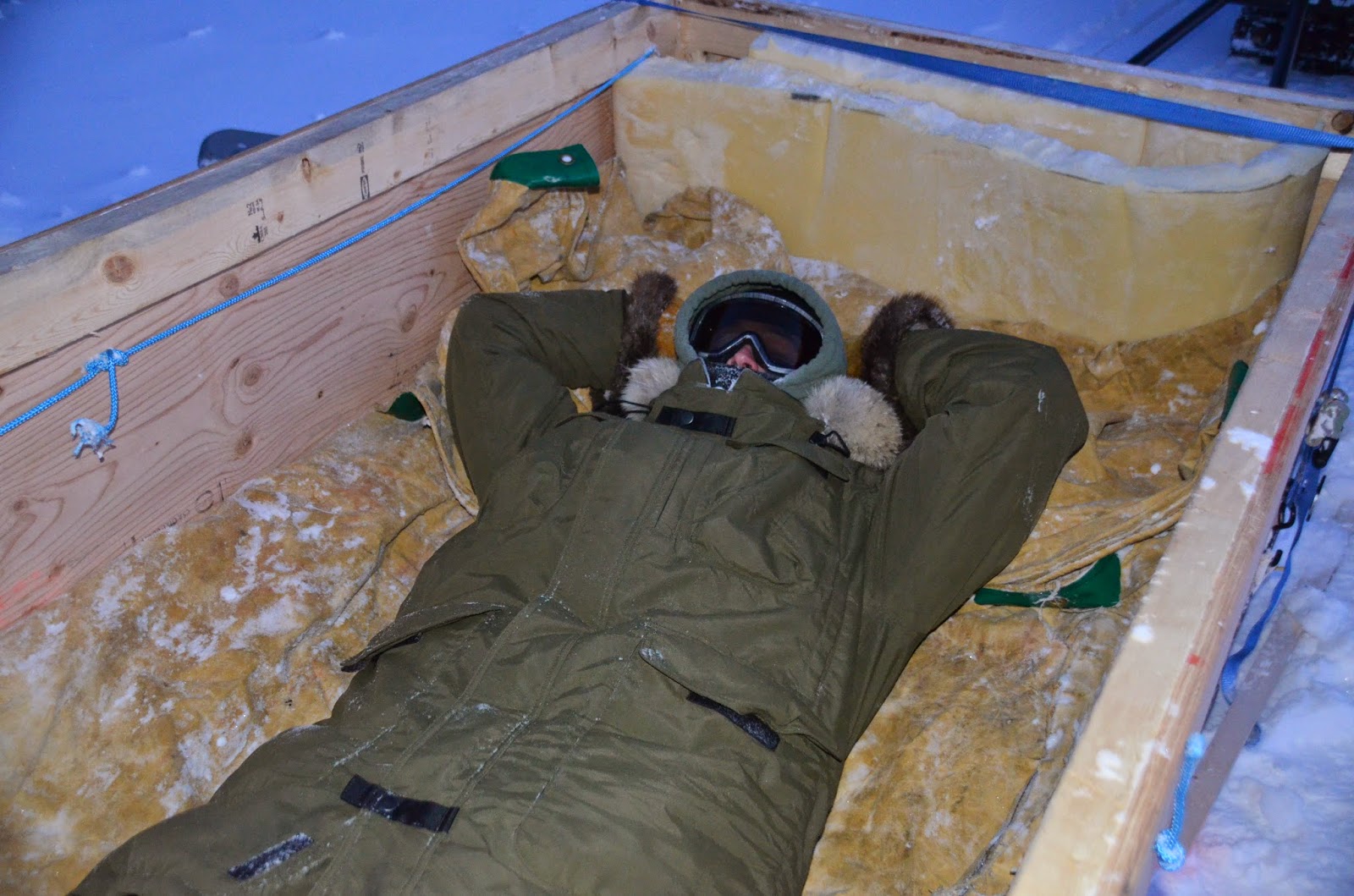 Always one to go the extra mile Brett makes sure everyone will be comfortable.
From the beginning of our relationship Claude has called Samson a meatball. As the dogs went into the box he was counting, "one meatball, two meatballs until there were ten meatballs in the box. Things were pretty iffy with dogs jumping about until Tom got himself settled in with them. After a bit of  pushing and shoving each other for space on his lap we were ready to go. 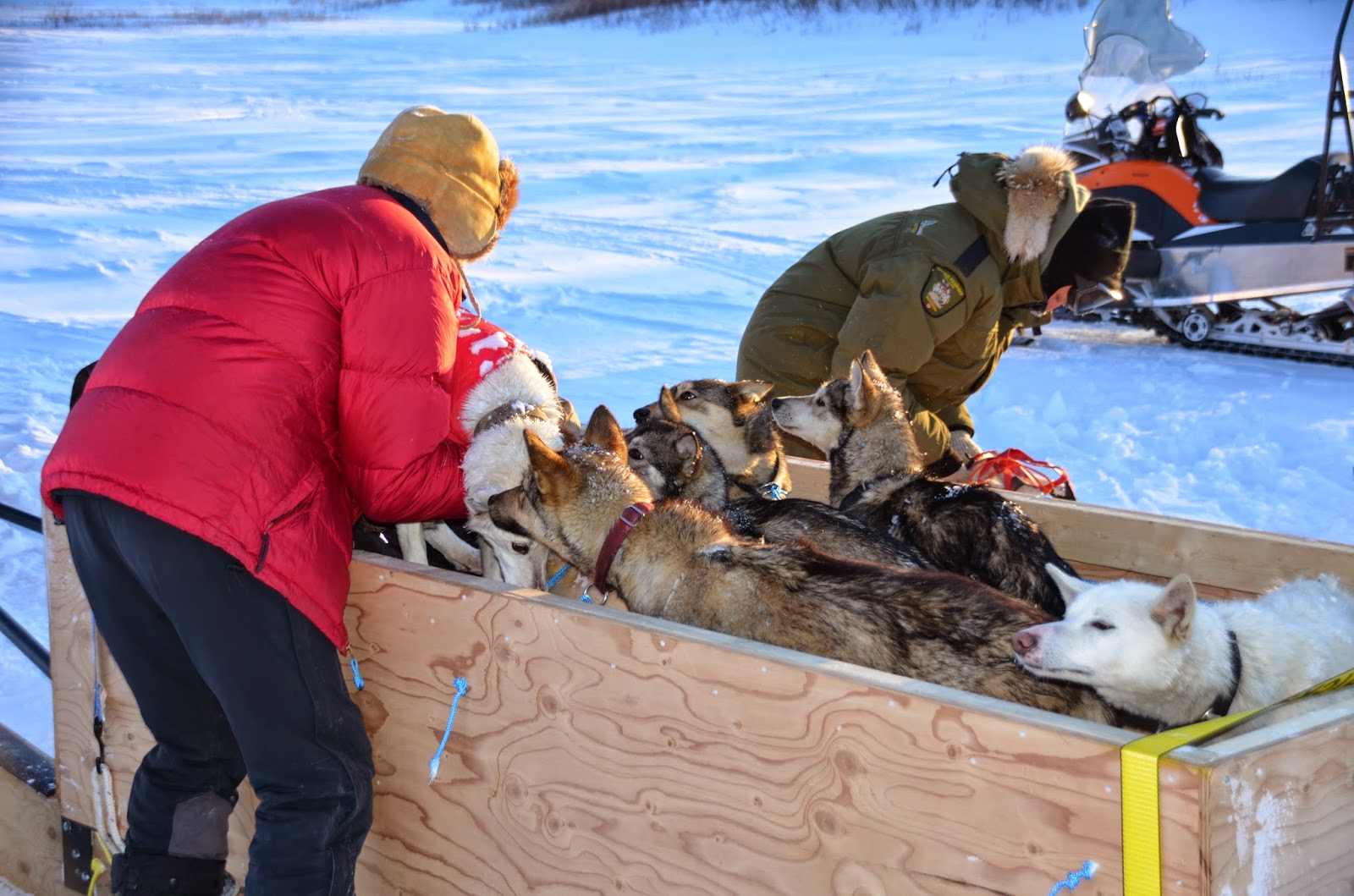 Tom, Brett and a box of meatballs.
A couple of hours later and we were back in town, we didn't pull the dogs across the finish line but skirted around it, after all they didn't finish the race.
Jessie Terry was there to meet his Dad with a bear hug. He told him that he now knew how his mother and others felt when he was out on the trail. He had spent the night worrying about his father's safety.