Not long now, we're almost there.

A friend and I were talking one day as Claude was going out on the land on the snowmobile. Mike made a comment about the way Claude travels; he was laughing when he said that most people put 200 miles on their machines in a season but for Claude that's just the first day of an outing. It's true, we put a lot of miles on our machines in any given year.

We had plans to travel to McClintock and back to pick up some things that we had left behind while doing the trail for the HBQ. The weekend came but between weather and a sore back our overnight trip turned into a day trip. We left mid morning heading for Lamprey first, Claude really wanted me to see the drifts on the Deer River, so through Goose Creek and south we went. 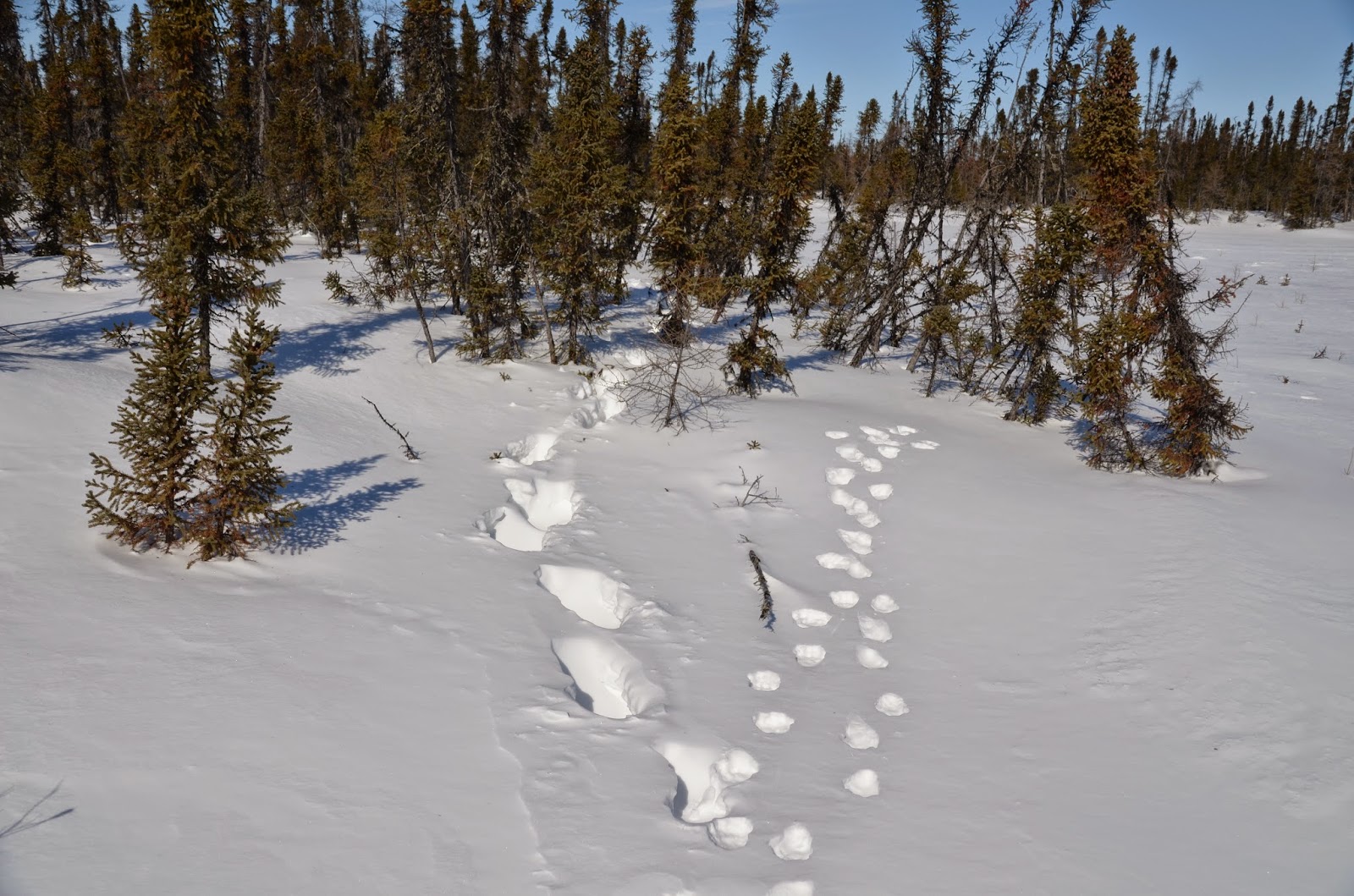 Along the trail near Goose Creek we could see where a wolverine had followed a moose everywhere it went.
Out onto the Churchill River and on toward the Deer. It takes about an hour to travel the Churchill to the Deer but there's a lot of great scenery along the way, it's never dull that's for sure and it was a bright, sunny day. The Deer River is a twisting and shallow, I remembered my friend Ashley saying that she counted turns one trip so I decided that I would give that a try as we would be on this river until McClintock.. On some of the turns you can look through the bush and see the end of the turn about 100 yards away, staying on the river probably made for a lot more mileage. We flew over the river on our way to Winnipeg last week and it looks to me about 4 times longer than as the raven flies. Claude was right though the drifts were incredible, flowing off the barrens above. 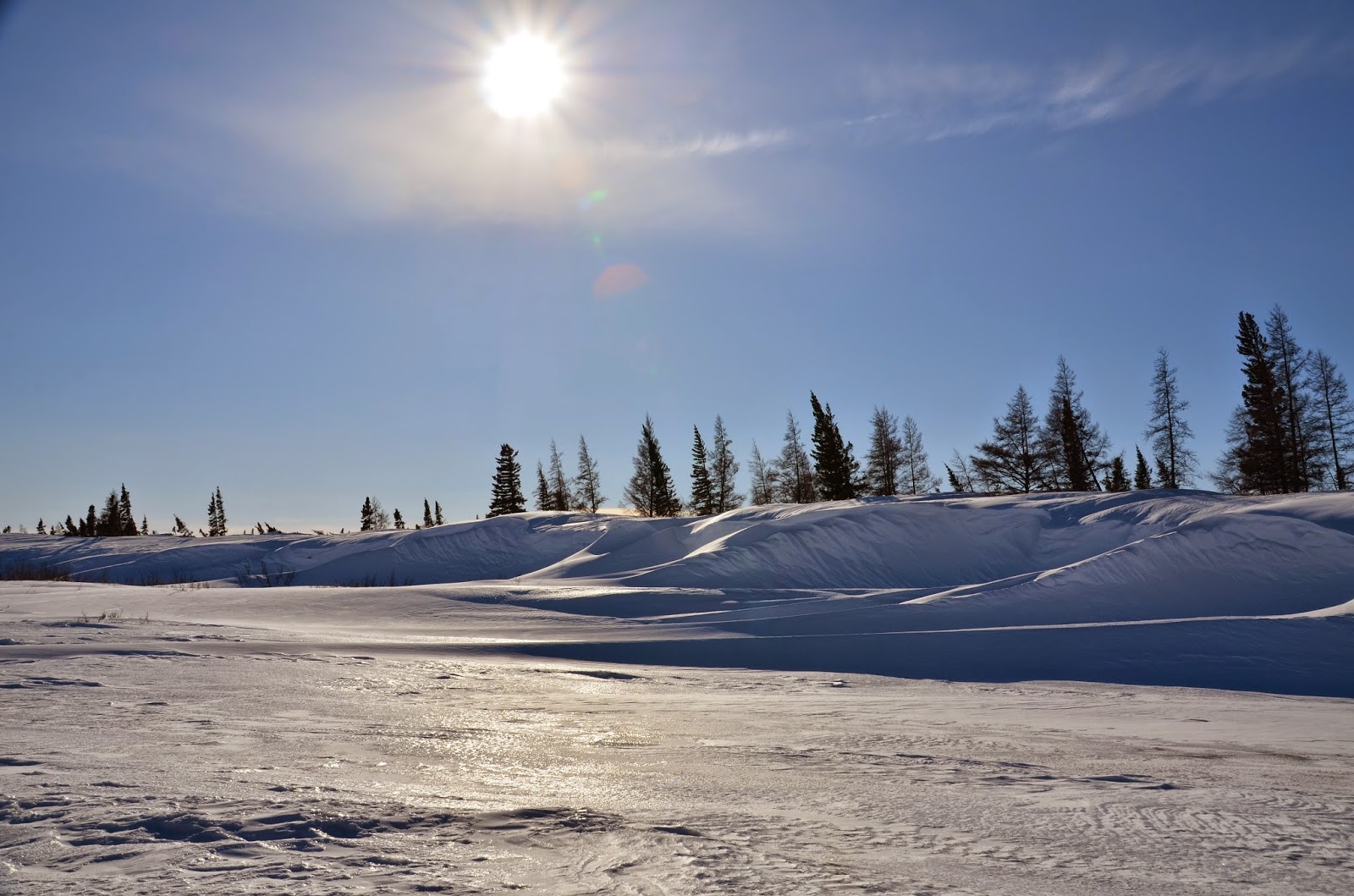 All along the river the drifts were different, sculpted by the wind . You would think that the kind of miles we cover would get boring and I've heard from other people that they do. I don't; I'm looking around for wildlife and at just how stunning this land is. I always thought that a frozen river would be a flat surface, that is not necessarily true. We crossed an area that was full of hills and valleys yet we were on the river. I don't quite understand how that happens, how did the river drop like that? More research will be done so that I can understand this phenomenon. 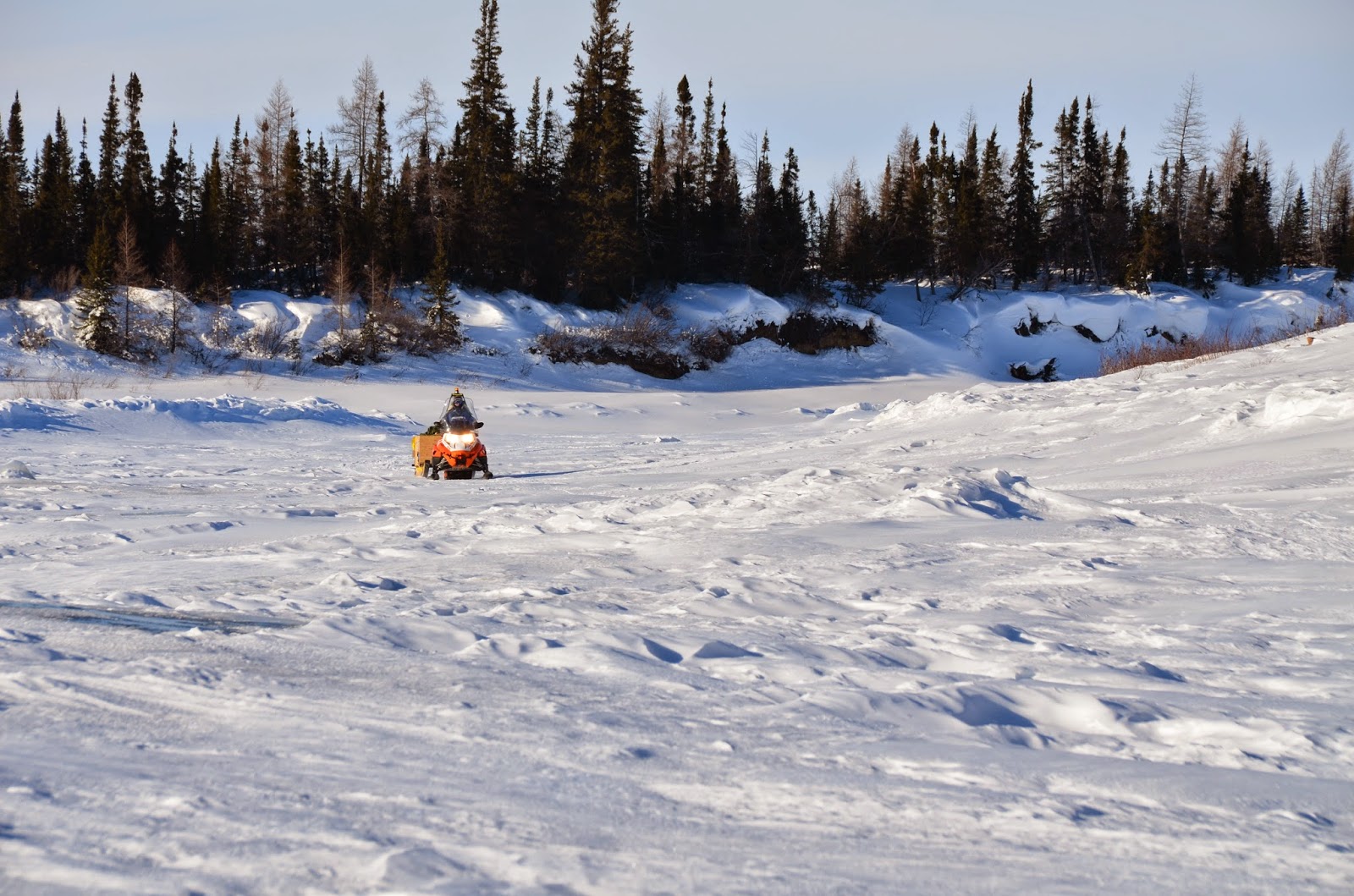 Claude crossing the hills and valleys that make up the ever changing Deer River.

We stopped at Lamprey for a short bit to pick up a few things that we had left there during the Hudson Bay Quest (HBQ). I was a little excited to see the scar left on the river after our three hour unscheduled stop in the slush, it was about an hour away. The turn count was over 150 by then. 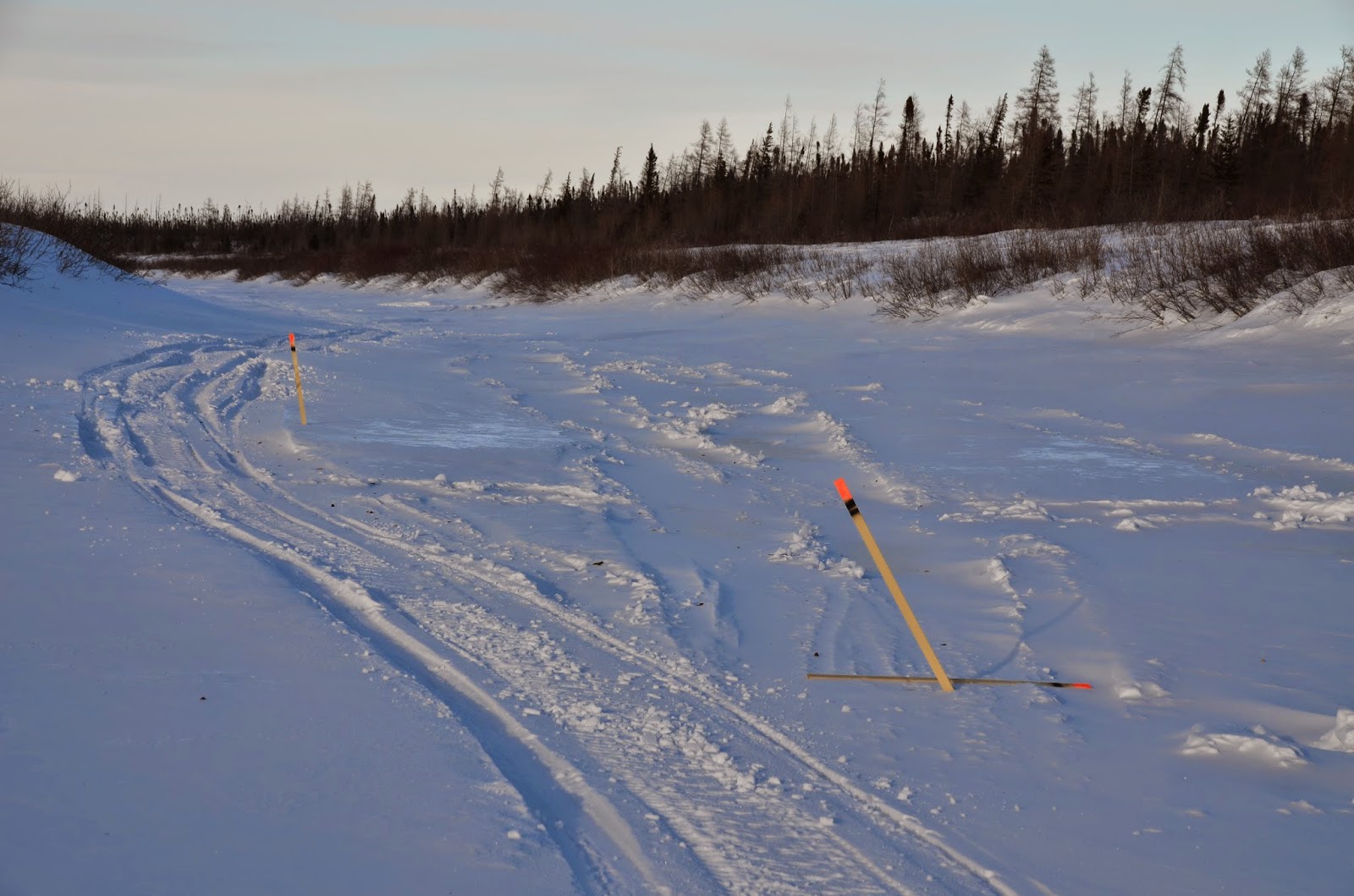 The scar on the river where we got stuck in the slush, snow blew it in but it was quite a stretch.

The count was 246 when we got to McClintock, even I couldn't believe it and I drove it. We arrived at McClintock at about 5 pm and stayed just long enough to have something to eat, pack up the 500 HBQ markers we had picked up on the way and the few things that we had left there, we left at 8 pm.
On the return trip we were going to travel on the Hydro line, it seemed like a good idea at the time, it should be a lot quicker he said. Something in the suspension of his machine had broken and he didn't want to pull the komatik with it so that was now up to me. The hydro line goes a long way across the barrens; for those that don't know what that's like here's a breakdown. The barrens are treeless there is nothing to stop snow, so it just keeps blowing. That cushion of snow doesn't exist; you travel across frozen ground. Tundra is not flat, it's terribly hummocky, so very bumpy on a snowmobile. 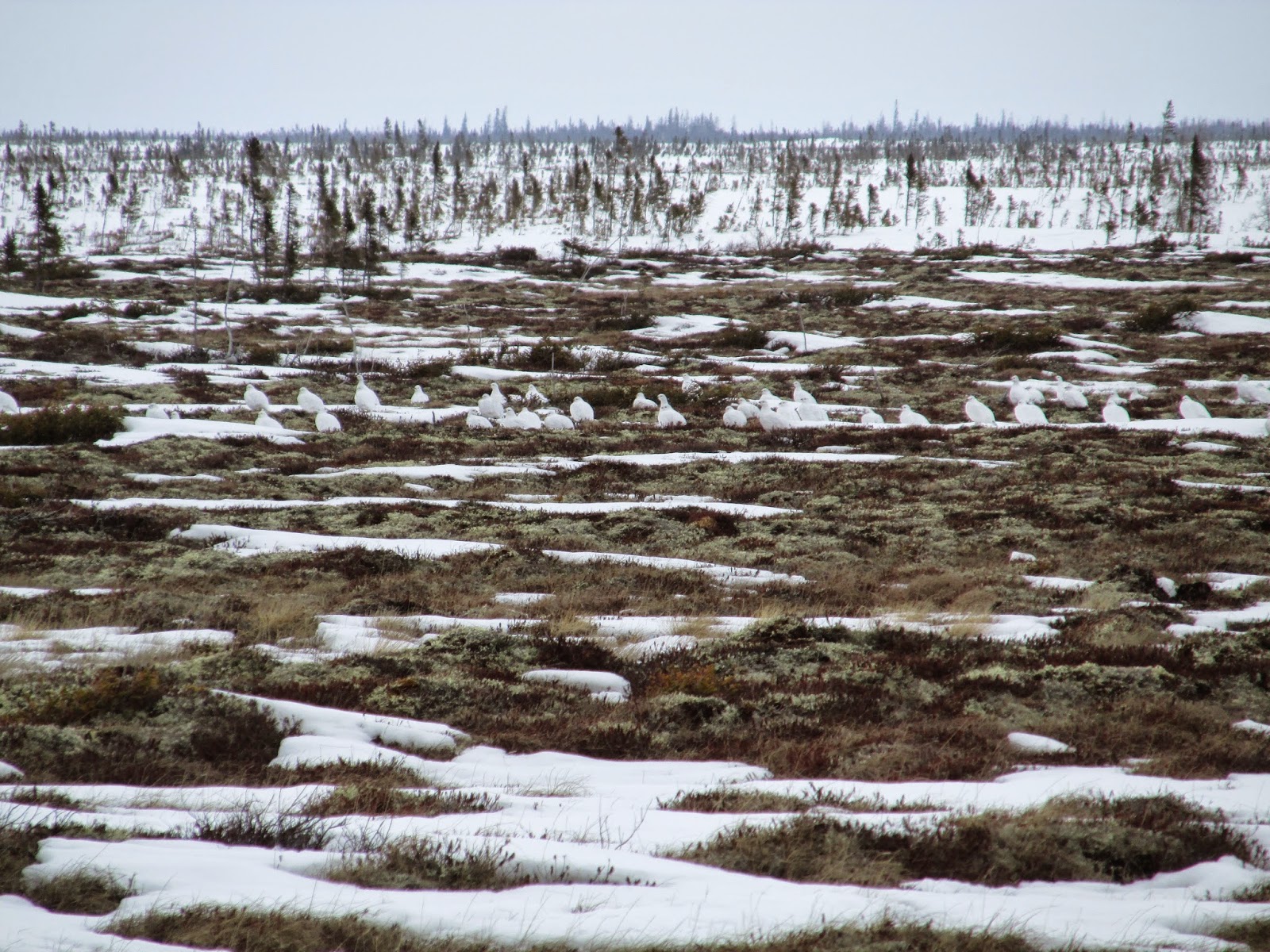 The barrens humpy, bumpy and very little snow even in winter.

Claude stopped after about an hour to see how I was doing, I asked how long it was going to be this bumpy; he said not long we were almost there. Every bump the komatik pulled the machine back just enough to cause pain in my lower back, I kept thinking almost there; even though I didn't know where there was. An hour passed and Claude stopped to check on me again. I was sure that we were where we were going; off the barrens. He told me we were heading toward the Chesney trail and we weren't there yet. It was then that it struck me; our ideas of almost there and not long were hours apart. Almost there and not long to me never takes an hour or more, now it had been an hour and we still weren't where we were going. Finally another hour later we were on the Chesney trail. This is the trail that is used by Wat'chee Lodge to transfer everything they need from town by Cats (really large machines) they pull a groomer behind them, it's like a superhighway compared to what we were on.

We arrived home at 12 am tired and sore. It was one of those nights when the bed comes up to meet you; you lay down your whole body sighs. A long good day on the land was over and we were both happy for that.
Posted by Unknown at 20:33