We spent a couple of days at goose camp, we're not big hunters but we like the camping aspect of the trip and it was the perfect excuse to get our visiting niece Melissa out on the land. This was our second year and this year there were more people, we ended up with quite a crowd of tents. The final head count was around 12. 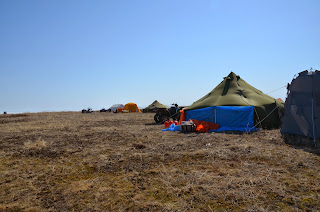 Campground
The trip always takes place when the snow geese start arriving. We start with departure by snowmobile from the river flats. Through the week people ask each other when they are going and make plans to travel together. Down the Churchill River with all of our gear and across Button Bay. There is a group of islands just on the shoreline where we pitch our tents, the hunters travel further inland to set up the blinds to hunt for geese. 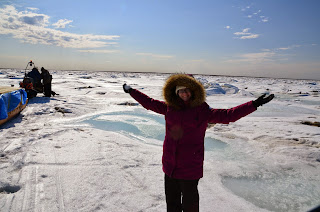 Melissa about 10 kilometers off the shore of Hudson Bay.
Day one involved getting there, it takes about an hour and a half from Churchill across Button Bay to our campsite.  There was a lot of unpacking and setting up to do, we had friends that arrived a couple of days earlier so we had a lot of help.
Claude, Melissa and our friend Caleb spent much of the afternoon collecting driftwood for the woodstove and rocks to keep the tent in place. They went out with the snowmachines and a komatik that came back full at least twice. 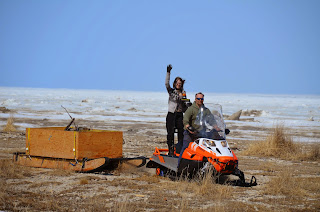 Claude, Melissa and a load of driftwood, a frozen Hudson Bay in the background.
Even collecting firewood was an adventure for our city raised niece, she went from being on a snowmobile for the first time to riding standing up on the back as her uncle drove along. Everything is new to her and it is exciting to see our life through her eyes. The day was sunny and bright, the land thawing and the bay still frozen.
Day two was just beautiful, it was sunny and warm, windy but pleasant. We woke to gunshots that drove Samson to cling to me for the rest of the day, shaking most of the time. Claude shot a goose in camp, as it came down I was sure it was going to hit Florence. She told me later it wasn't going to hit her she would have just reached out and caught it, true northern woman. 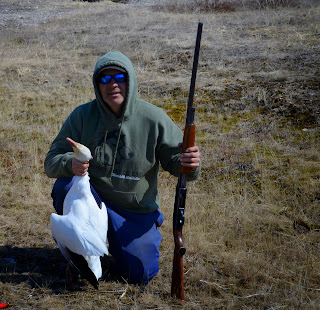 Claude and his camp goose
I spent the day watching the birds as they arrived, leave it to me to forget my binoculars of all things, bitter disappointment, I would rather have forgotten my toothbrush. Most of the day I was guessing at the birds or taking long shots of them with my camera and then zooming in to ID them. I saw the Tundra Swans below, Semi-palmated Plovers, Snow Buntings, Lapland Longspurs and I'm pretty sure at least one Lesser Yellowlegs, along with the thousands of Canada, Ross's and Snow Geese. Florence and Camille had their 3 year old grandson with them and he was just a blast, we all took turns playing and caring for him and like all kids he took a huge liking to Claude and Melissa. 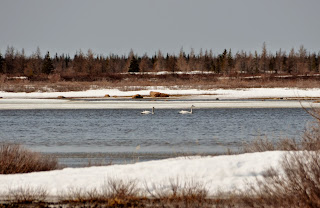 Tundra Swans
I love to feed people and was prepared for a crowd as usual, Caleb was invited to join us for dinner the two nights we spent in the tent. The week before I had cooked all of our meals and packaged them so we just had to reheat on the wood stove. Claude and Melissa named breakfast "McRhonda's", an english muffin with scrambled egg, bacon and cheese, Claude treated us both mornings to breakfast in bed, so thoughtful. Lunch was smokies and then dinner chicken stew or spaghetti and turkey meatballs with either cole slaw or tossed salad.
Claude and Melissa went out to the blind with Camille that evening, Claude to shoot with a shotgun and Mel with her camera. The trip was made by argo, an amphibious vehicle, and men being little boys on the way back they decided to cross the ice. Florence and I heard the machine go through the ice from camp, but with these guys that's what counts as fun.

As Florence and I watched; they were coming across the ice and suddenly they were in the water. If you're going to ride in an Argo you may as well try it all.

It wasn't long before we saw the lights of the argo coming toward us all of them laughing about how much fun they had. A beautiful sunset gave us no clue as to what we were going to have to deal with the next day. We had one place on the site where we could get an internet connection, we all laughed at each other walking in circles with our phones held up trying to find that one spot. What this spot provided us with was a connection to the weather, we found out that it was not going to be good the next day. The wind was going to gust up to 60 kilometers an hour and the temperature was going to dip below zero we were going to make preparations. 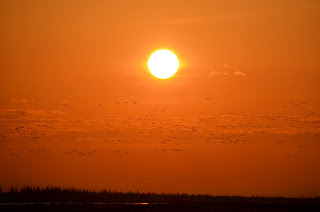 Sunset and hundreds of geese